WOODSTOCK – A Lakemoor woman who was ticketed for displaying two toilets and a sink filled with flowers wants a judge to declare the village ordinance that she was cited under unconstitutional.

Tina Asmus was fined $25 last week after failing to remove the unusual planters from her front yard at 134 S. Highland Drive despite receiving a 30-day warning. An attorney for Asmus filed paperwork Thursday asking a judge to stop the village from enforcing the ordinance while determining its constitutionality. 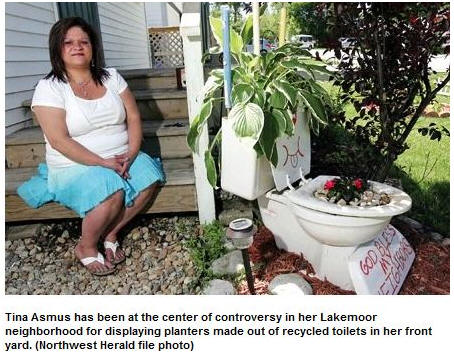 Village officials said she was violating a public nuisance ordinance prohibiting implements, equipment and “personal property of any kind which is no longer safely usable for the purpose for which it was manufactured.”

“There are no rules, requirements or guidelines in the ordinance for determining what is or is not an impermissible use of equipment,” Kililis wrote. “It remains, therefore, within the sole discretion of the village board of trustees to decide whether a person’s use of equipment or materials on their property is impermissible.”

Village President Todd Weihofen said the village planned to stand by its ordinance. He said the village’s recent enforcement efforts had been driven by complaints and obvious infractions.