We’ve all been hearing and seeing the news lately with the seemingly never-ending stories of crimes committed by those in power. A powerful example below is from a community editorial, followed by an area for your comments: 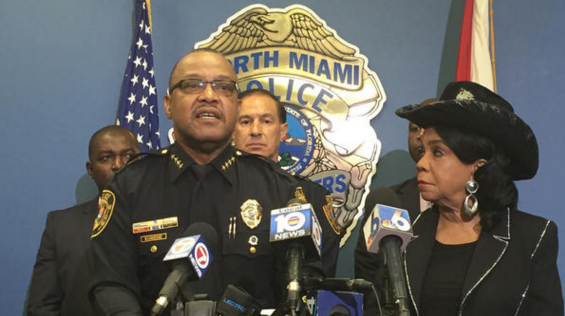 Charles Kinsey is lying on the ground with his hands up, begging the police not to shoot. A police officer who is on SWAT, who does not know why he fired his weapon but fired it three times, now claims his target was the big guy sitting up and not the black guy lying on the pavement with his hands up. If that is the case, then why roll him over, cuff him and leave him there like a dog bleeding in the street waiting on rescue? If the officer really missed his target, wouldn’t he want to administer first aid? Wouldn’t he want to help the victim of his missed shot? Instead, the victim is cuffed and ignored by police for almost 20 minutes while rescue was dispatched. Community members have come forward saying they told the cops about the toy truck in the hands of the autistic man and that it was NOT a gun. In the video, Kinsey can be heard saying, “Don’t shoot, it’s a toy truck. I’m a counselor for this special needs guy…” and then off video, three shots are fired. Two shots miss everyone and one shot hits Mr. Kinsey in the knee. We are now expected to believe the story of an errant shot and the Department’s “mea culpa.”

There is a very serious race issue in this country. There always has been. Black people are profiled on the regular. For decades, bad cops have been protected by the unions and not allowed to be weeded out. The culture of prejudice has been allowed to flourish. After the Laquann McDonald shooting video was revealed, the union hired the cop who was put on leave to be the union hall’s custodian. The investigation in the aftermath of the release of that video has rocked Chicago and the entire nation. Traffic stops are down nearly 50% in Chicago this year. Why? Because cops are afraid of what might happen to them and making that traffic stop is not worth the risk. We have had decades of bad cops targeting black people and now a few months of crazy people targeting cops. We have cops who have used real mug shots of black men for target practice at the range. The system is so broken and the cover ups so long standing that it is now ingrained in the system. If we want this to change we need to demand change. We need to hold ALL people responsible for their actions. We need to guarantee the Constitutional rights of ALL people are protected. This ties back into the issues we see with the Public Defenders’ offices being wildly underfunded and over worked. How can we expect that the Constitutionally provided for defense of indigent defendants is there and is excellent? These are the most vulnerable citizens and the most often marginalized. It has long been said that it is the defense bar that holds police and prosecution accountable. This is one of the checks and balances built into the system. This is one of the checks that cover ups and lack of funding has stymied.

There must be change. We must change how we train our police and how they are held accountable at every level. We must change the relationship between police and community from adversarial and antagonistic to one that is amiable, civil and understanding. We cannot allow even subtle racism to be allowed a place in our communities and certainly not in our leaders and police force. We must deliver on the promise of a defense for indigent clients and make sure that defense is excellent. We cannot abide anyone being targeted by police and we cannot abide police being targeted by anyone. No group of individuals is fully represented by any single one of its members.

Without these changes, I fear we will only see more violence.